Here are my PRs at the end of the year:

For the entire year my programming was 5/3/1. I like the program it affords a perfect mix of structure and flexibility.

The following chart doesn’t show what I was maxing out with each month it just shows what numbers I used to calculate my 5/3/1 workouts. Jim Wendler has a write-up on what the training max means. 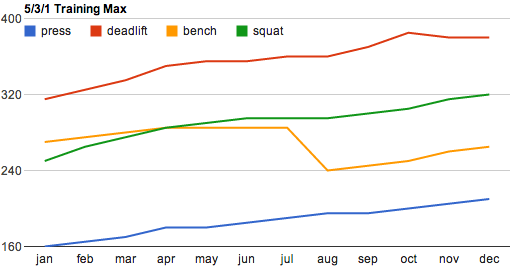 Mid-year I bought Jim Wendler’s new book Beyond 5/3/1. I’m a Jim Wendler fan boy so I enjoy reading anything he puts out but I bet most of the people following 5/3/1 don’t need to read this book. But whatever, the man puts out lots of great free information, kick him $10 for the Kindle version wether or not you use any of the concepts from Beyond 5/3/1.

For almost all of my lifts I’m getting close to where I would like my strength level to be. I’ve never done CrossFit but you hear them talk about strength endurance. That implies that you build a level of strength and then demonstrate endurance over that strength.

What I might start doing is working in some EMOM gradually in my last sets. Gradually doing this for all assistance sets. Keeping all the weights the same.

My press is relatively strong compared to other lifts. I’m able to make continual progress on it. I don’t feel like I’m over-extending myself, I think I have more in the tank. For 2014 it’d be great to inch up to a 225 overhead press but I could see stalling out before I get there. 205 would be a barbell with a 45 and a 35 on each side. Seems respectable for a strict overhead press.

For the most part deadlifts went along well. I continued my conservative progress. However, I had a failed 365 pound deadlift attempt in November.

My dead, like my squat is not very impressive. I’m being very conservative with my back. I make sure that I can do the reps with perfect form to protect my spine.

The bench is the yellow line up above. It took a big dip in August. The root cause was ego. I was taking a wide grip on the bench because I was focused on the getting numbers up. Wide grips are used in competition for power lifters but it’s known that it isn’t the greatest thing for your shoulders.

A guy I know gave me a suggestion or at least something to think of. With respect to the bench grip width, in normal life you are almost always using your pecs with your hands shoulder width apart. Think of a football lineman pushing at his opponent, he has his hands shoulder width. It shouldn’t be a huge epiphany I suppose but it helped things click for me. Oh, and Jim Wendler has said a lot about keeping a narrow grip on the bench for shoulder health as well.

Besides the wide grip I also noticed that my shoulders were rolling forward while benching and doing push-ups. In these movements your pectorals and triceps should be doing the majority of the work and your shoulders should be packed.

Alright that was a lot of words but it really came down to a few things I needed to do:

I’m content with my bench being lower. I’ve been adding 5 pounds a month. Right now I think that I’ll be content when I am doing a 1RM of 275 on the bench but again, maybe 315 will be calling once I reach that.

Yeep I post video of my squat PRs online. A few years ago I had my squat up to

A real squat has your femur at least parallel to the floor. Or easier to judge, the crease of your hip should be below the knee. Here’s one of my last squat attempts for the year.

My squat is very slowly moving along. I’m 42 this year I’d like to gradually work up to a 315 squat and hang there. I’d like to be someone that can hit a squat triple for 315 any day of the week. Among power-lifters that would not be respectable but I’d be happy with that for a software engineer.

I know I’m setting the bar low here but this is where I minimally want to be this year.